A fish fillet with a side-order of Microplastics please

The sea and oceans are facing a huge challenge with the large amounts of plastics. The European Chemicals Agency (ECHA) has defined microplastics as follows: “Microplastics are synthetic, water-insoluble polymer items smaller than 5 mm, which are considered to be of particular concern for the aquatic environment.” The potential impact of microplastics on the aquatic life and human health have generated major concerns in Member States of the European Union and worldwide.

We use big amounts of plastic every day, and in many countries, there is no collection or good recycling programs for this type of litter. The plastic often ends up being washed by the rain into the sewers or rivers and eventually ends its journey in the sea. This creates a lot of litter that is very slowly broken-down, 50 – 400 years, floating around in the oceans. The physical impact the plastic litter has on wildlife, has been demonstrated numerous times in the field, but the impact microplastics have on the marine environment is not that obvious. It is however harmful for living organisms, physical effects caused by the particles themselves and transportation of toxic chemicals bonded to the microplastics that are released within the organisms. This can further lead to potential effects on populations, communities and ecosystems.

Sources for plastics are as varied as it is enormous; bottles, food containers, pipes, textile, fishing gear, films, bags, cigarette butts, tyres, balloons etc. Some microplastics are manufactured for specific applications, such as industrial scrubbers or personal cleaning products such as toothpaste. All plastics can be subject to fragmentation on environmental exposure and degradation into (secondary) microplastics. The proportion of plastic reaching the ocean to become plastic litter depends on the effectiveness of the re-use, recycle and waste management chain.

Microplastics in the Oil & Gas Industry

Today we do not have any special restrictions on the use of microplastic particles in products. NEMS is responsible for the NEMS Chemicals database containing data on biodegradability, bioaccumulation and toxicology (HOCNF (Harmonized Offshore Chemical Notification Format)) on all the chemical products used and discharged by the oil and gas industry into the North Sea, the Norwegian Sea and the Barents Sea. A new proposition to include microplastics in the HOCNF format is underway, if it is included in the HOCNF it would be possible to track how much microplastics are released to sea by the oil and gas industry.

A survey was done by EOSCA (European Oilfields Specialty Chemicals Association) in 2018 to estimate how much microplastic is used in EOSCA products sold in Norway, the United Kingdom, Denmark, the Netherlands and Ireland. Out of 3252 products only 3,5% contained microplastics. As we can see from the pie-charts below, the amount of known microplastics in chemicals is very small. We should however try to reduce the discharge of microplastics in any circumstance. 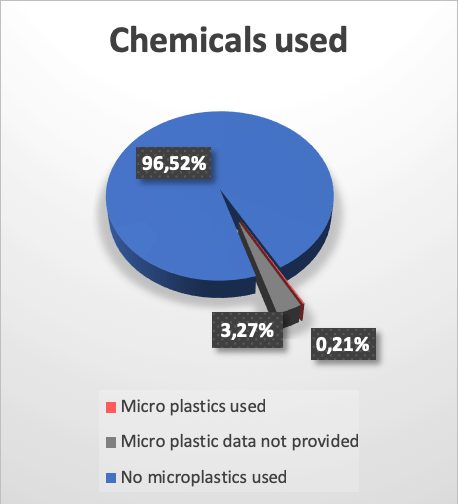 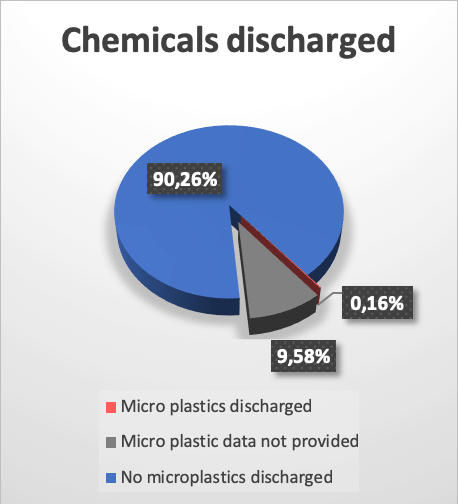 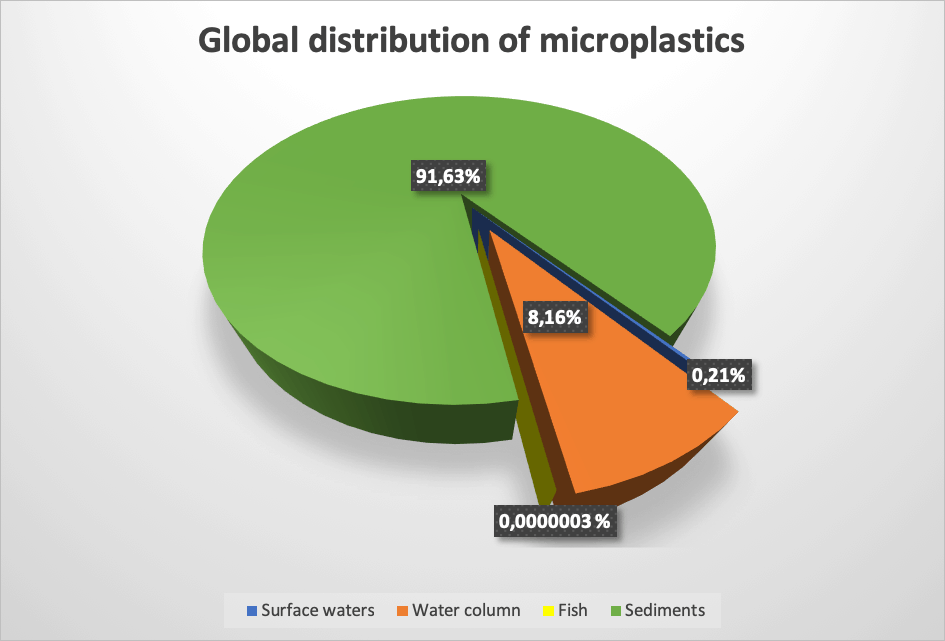 Monitoring of microplastics in the ocean

There is a high focus on microplastics due to the direct effect this pollution has on living organisms. When the microplastic enters the ecosystem, the organisms have trouble processing it. Plastic is persistent and living beings do not have the ability to process it.

Over time microplastics is degraded into nanoplastic by UV- (sun)light, mechanical/physical degradation, microbial degradation, hydrolysis and heat. This is impossible to see for the naked eye in the fish we put on our dinner plates.

As of today more long term research is needed to find out how microplastic affect the marine environment. Today Blue mussels is the main method we monitor for microplastic pollution. Sediments are often thought to be the final destination for most microplastics in the environment. Monitoring the sediments would give us a better understanding of the long-term trends. However, due to the complexity of sediment analysis, it might be more suitable to use sediment dwelling organisms, such as worms and bivalves feeding off and in the sediment. 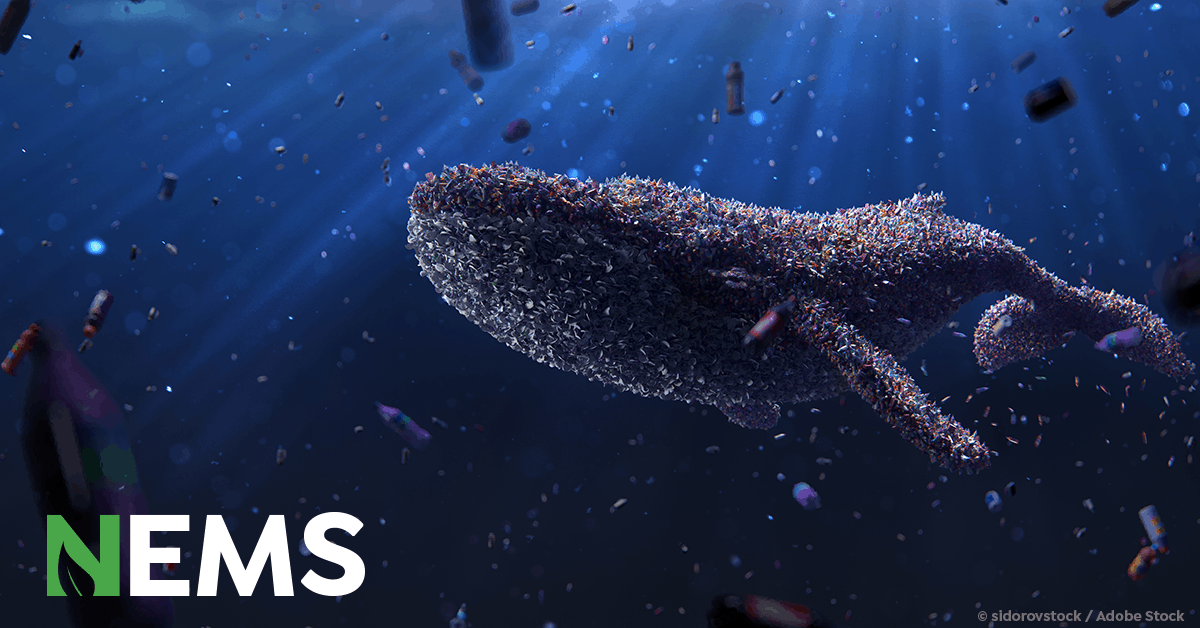 Cleaning up plastics from the ocean

When microplastics started making headlines in mainstream media, many people and authorities started to think of possible solutions to this problem. In Norway a campaign called “fishing for litter” was launched. Fish boats are used to collect litter from the ocean and deliver it for onshore processing. In 2017 there was collected 84 tonnes of litter (not only plastics).

In the United States the Ocean Concervancy organization has started a programme called the International Coastal Cleanup which engages volunteers from over a 100 countries to pick up litter around their coastlines each year.

In the Netherlands The Ocean Cleanup project has developed a system to collect floating plastic in the open oceans. A 120-meter-long curved “pipeline” with a four-meter skirt underneath collects plastic floating near the surface. The Ocean Cleanup project has done a lot of research on how the plastic behaves and are now testing their first clean-up system. It was set afloat late in 2018, but in the last days of 2018 it was running into trouble. When transported to land it had collected two tonnes of plastics, now it is onshore to have improvements done to the system so it can eventually gather up to one tonne a week of floating plastic debris.

In the Pacific Ocean a plastic “island” known as the Great Pacific Garbage Patch was identified by Alaskan researchers in 1988. The Ocean Cleanup project have identified and measured the island that has been created as a result of the currents in the North Pacific. Their researches have reported that it covers 1.6 million square meters. Measuring a 100kilograms of plastics per square kilometre in the centre. The average piece of plastic is only 0.5 cm long. And the total amount of plastic is estimated at an astounding 80.000 metric tonnes.

How to make a difference

There are several ways to make an impact, from supporting organisations, participating in coastal cleanups, to making sure you recycle and throw away your litter in the correct bin. The most important thing is to do something. How you choose to pitch in is up to you. Companies can also participate, this can be done through having good routines on Waste Management and focusing on sustainability in their operations. Many companies release Corporate Sustainability Reports each year to highlight their work.

Report done by NIVA for Miljødirektoratet;